Xiaomi recently launched its flagship model, the Mi5 in India. With Qualcomm’s Snapdragon 820 processor, the smartphone is set to compete with the likes of OnePlus 2 in what is being touted as the battle between the Chinese Smartphone flagships.

Both OnePlus and Xiaomi have established themselves as premium smartphones in the budget range along with Mobile phone giants like Lenovo / Motorola. With both companies releasing their flagship smartphone models, the Chinese tech giants will test their luck in the thriving Indian Marketplace. While both Xiaomi and OnePlus battle their way to the top, the end users have a plethora of options to chose from, not to mention, get benefited from great devices.

One of the key appeals of Xiaomi Mi 5 is the body design which is of glass, both front and back, encased in a metal frame along with a finger scanner which is embedded inside the home button. The OnePlus 2, on the other hand, comes with metal frame with the signature finish of sandstone in the back, but also boasts of a fingerprint scanner on the home button.

OnePlus makes its case with its home developed OS, OxygenOS, built on top of Android 5.1. The fingerprint sensor in OnePlus 2 is extremely fast for unlocking the phone. Moreover, its low priced range is making the premium brands sweat. Xiaomi, plays with mystique as well on the camera front. Its beautiful glass and metal body appears Galaxy like and the camera has a 4 axis stabilization so that blurry images are eliminated from your photo roll. 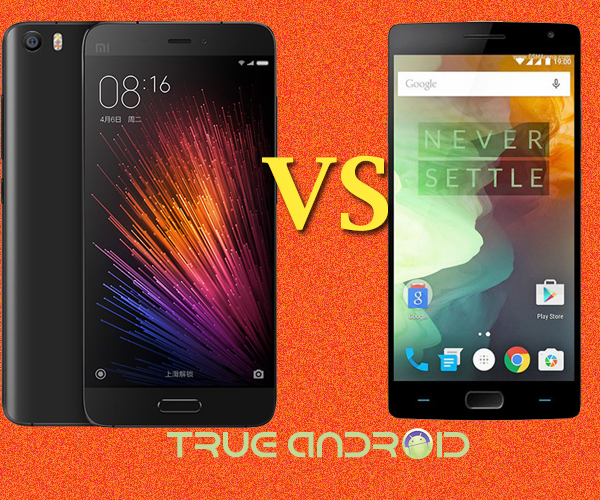 The OnePlus 2 features Qualcomm Snapdragon 810 64 bit Octa-Core processor while the Xiaomi Mi 5 features the Qualcomm Snapdragon 820 Quad-core 64 bit processor. Clearly, more core results in better parallelism which means that a greater number of tasks can be run in parallel without affecting performance or slowing down the user interface.

OnePlus 2 has 4GB LPDDR4 RAM which is around 33% more than Mi 5 which has 3 GB RAM. More RAM means more applications running at the same time, making the device faster. OnePlus 2 also has 64GB expandable storage while the Xiaomi Mi5 has 32GB storage which is a full 100% less than OnePlus 2.

Xiaomi’s Mi5 clearly has better camera resolution when it comes to appealing the photographers out there. Around 23% more megapixels are present in Mi5 than OnePlus 2. With better resolution, comes better picture quality. Not only this, the 4 axis camera stabilization in Mi5 means bye bye to those blurry images from your photo roll. OnePlus 2 has 13 MP with 4128 x 3096 pixels camera while its counterpart, Mi5 has 16MP with 5312 x 2988 pixels camera. Both phones are equipped with premium camera sensors though.

Both OnePlus and Xiaomi run their smartphones over Google’s Android OS with a variety of skins on top. For OnePlus 2, the company is using its homemade OxygenOS for the global handsets while using HydrogenOS for the native Chinese variants. Both of these are based over 5.1 Lollipop. The Mi5, on the other hand, is equipped with MIUI 7 software which runs on 5.0 Lollipop. The new user interface adapts quickly to the behavior of the user and delivers a personalised smartphone usage experience.

With a 3300 mAH battery in OnePlus 2 and a 3000mAH battery in Mi5,the former has around 10% more battery capacity. While this is not much, yet, with more battery size, the device lasts longer and is sure to give extra mileage on daily use.

While the competition does not end with both the phones having their own advantages and flaws, it is clear that the tech giants have gone the extra mile with their flagship models. Some of the other features include acceptance of wireless payments in Xiaomi’s Mi5 via NFC. The added perk, two NFC enabled devices can be connected by just touching them with each other. Mi5 also supports the old school FM Radio which is missing from OnePlus 2.

Both the phones are equipped with their own pros and cons. While it is not fair to compare a 2015 release with 2016, understand your own needs and choose your pick!