In the realm of smart phones, Samsung has been ruling over the industry for quite long time. In the beginning, no brand dared to challenge the fame of Samsung. Its extreme likeliness among the community was accepted by all the competitors. That was the reason nobody made a model to compete with Galaxy phone. Some companies were also of the view that reducing the price of their phones will do them good but that strategy failed. Now the companies have become smart enough. They know how to give tough time to a top-notch brand. Multiple sets are developed by number of companies to give Samsung a tough time. Xiaomi Mi5 is also a Smartphone which is giving Samsung Galaxy a very tough time.

Both are touch screen devices launched in the same month as Feb, 2016. User reviews about the two sets aren’t very different also. But to compare two phones on the basis of facts, their technical knowledge is very crucial for the consumers. Some general areas of specifications are below. 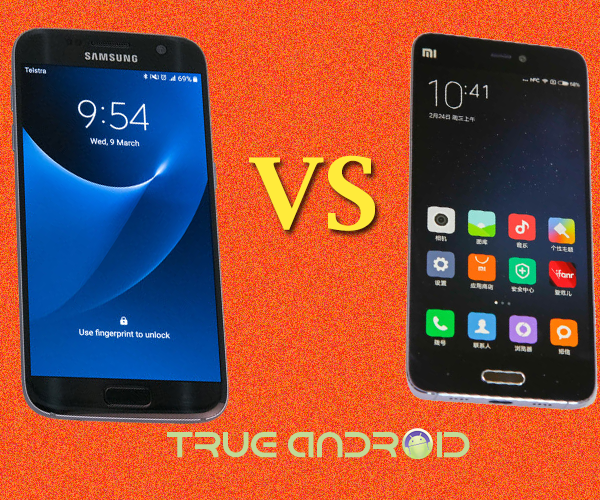 Stylish design of the phone is definitely the first and foremost thing which should be kept in mind while developing a new phone or refining the previous version. Dimensions of the phone should also be in perfect correspondence between the user interest and economic budget. Dimensions of Xiaomi Mi5 are 144.50 x 69.20 x 7.25 while that of S7 are 142.40 x 69.60 x 7.90. Mi5 and S5 weigh 129 and 152 grams.

Display of any Smartphone is also of great importance for the beautification of its looks and watching videos and movies on big screens. S7 is manufacture with screen size of 5.10 inches while it’s 5.15 in Mi5. High resolution glass was also used for making the device more eminent. Same is done in the current case. Resolution of Xiaomi is kept as 1080 x 1290 pixels with 428 ppi (pixels per inch).

High resolution camera with other prime features is also the requirement of consumers. A brilliant phone without a nice camera is absolutely useless. Camera has now become the first factor to judge the quality of a phone. Xiaomi intended to provide best services to their consumer. That’s the reason rear camera is kept with the resolution of 16 mp and LED flash light. Front camera is of a little less importance, so it’s kept with 4 mp resolution. On the other hand, S7 has 5 megapixel front camera and 12 megapixel rear camera with LED flash light. Xiaomi seems like defeating S7 in this regard, but due to hardware acceleration and many other reasons, still S7 is preferred by the community.

Battery power and reliability is another crucial area which must be focused upon. Because a Smartphone with low quality battery is as useful as a dead cellphone. Battery Capacity of both devices is 3000 mAh and the battery is non-removable.

High quality chips and other hardware accessories must be used in a Smartphone to make it freely and efficiently usable. Ease of use of a phone depends greatly on the hardware structure of the phone. Processor, Ram, storage space and things like that everything should be at its level best. 1.3 GHz quad-core processor is used in Xiaomi Mi5 while 1.6 GHz octa-core processor is used in Samsung Galaxy S7. RAM used in Mi5 is 3 GB while 4 GB RAM is used in S7. Internal storage of both the cellphones is kept 32 GB but Mi5 has not been equipped with the capability of expandable storage. It’s obvious from the above discussion that Samsung has shown its class in the hardware part. Moreover, Compass, Proximity Sensor, Accelerometer, Ambient light sensor and Gyroscope are being used in both the Smartphone.

Use of latest and proficient software is also the specialty of a device. Both Smartphone are fully equipped in this regard with Android 6.0 version. Both phones are dual sim with Wifi, GPS, Bluetooth, NFC and Infrared capabilities.

As far as pricing of both phones is concerned, there is a huge difference between the prices of both devices. S7 is available in $670 while Mi5 costs only $305 to anyone. Although Xiaomi is kept at very low price, but it has got almost all the capabilities which are the integral part of S7.

To conclude the whole discussion in a few words, it’s obvious that the price is more of the “Name” than material. Xiaomi almost touched the level of S7 but due to low price, it’s still considered a cheap (low quality) device which is not the truth.