Android is considered the most wanted phone all over the world in the realm of smart phones. There are a lot of reasons of the fact. Its user friendliness and availability of bundle of free applications is also a very prominent reason of its god market. But the problem is that there are a number of android manufacturers in the market. Samsung has been ruling over the world of Android phones since the invention of this new technology. But the scenario has changed now and many other brands have been appeared as a threat to Samsung.

G5 and S7, a general Comparison:

Samsung phones were going top of the list before and no brand was able to challenge the supremacy of Samsung. However, LG took the initiative and decided to launch a new, modified and renovated version of G4 to compete with Samsung Galaxy S7. Both phones were intended to give the consumers a new, unique version of smartphone. 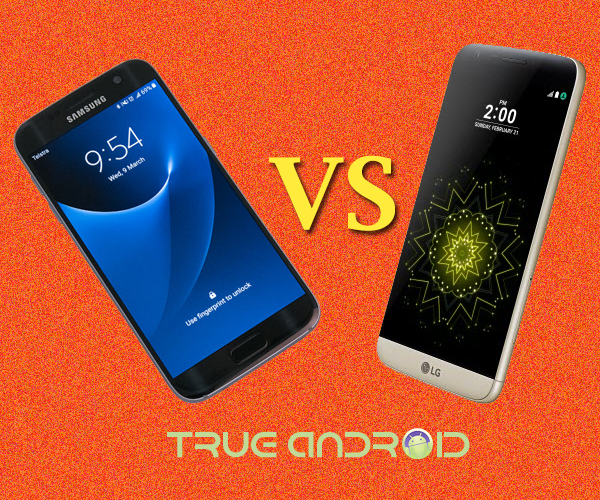 Both phones are similar in most of the areas, but they have also many differences in some other regards. Few things which come into the mind while talking about any phone is its appearance, shape and size etc. Both brands took this thing under consideration while manufacturing the device.

Galaxy S7 is of the dimensions 5.61 x 2.74 x 0.31 inches while the dimensions of LG G5 are 5.88 x 2.91 x 0.29 inches. Both are of Android version 6.0. S7 weighs 152g while G5 has a weight of 159g. S7 is made of glass and aluminum while G5 is of the full metal body. S7 is available in Black, Grey, White and Gold colour while LG replaced the white color with Pink to increase the diversity. Main display of the galaxy S7 is 5.1 inches while it is 5.3 inches in G5. Resolution is same in both the phones with 1440 x 2560 pixels. Pixel density is a little greater in S7 with the value of 576 ppi as compared to 554 ppi in G5. “SUPER AMOLED” technology is being used in S7 while “IPS LCS” is used in G5. Light and proximity sensors are used in G5 while S7 has an additional feature with Corning Gorilla Glass 4 along with the above mentioned sensors.

Camera is definitely a very integral part of any smartphone and most of the people are very fond of purchasing the cell phone with highest resolution camera. But only resolution doesn’t matter in cameras. Aperture size and pixel size also contribute in the eminence of any camera. S7 was assembled with the front camera of 5 megapixels and back camera of 12 megapixels with LED flash light, aperture size F1.7, 26mm focal length and 1.4 micrometer pixel size. On the other hand, G5 was released with 8 megapixels of front camera and 16 megapixel back camera with LED flashlight, aperture of size F1.8 and the pixel size of 1.12 micrometer. Both phones have the features of optical image stabilization, face detection, self-timer, auto focus and Geo tagging. One feature was added in the S7 apart from these which isn’t present in G5. The specialty is smile detection during taking the shot. HDR (high dynamic range) and panorama shooting modes are available in both the smartphones. So it can be said that G5 beat S7 in camera resolution but S7 managed the difference by the high quality of other camera related things.

In the section of multimedia, both phones have almost same specifications. Music can be filtered by Album, Artist, Genre and playlist in both devices. FM is made a part of G5 but it’s not there in Samsung Galaxy S7.

It was expected from the specifications of both devices, there were rumors that both phones will have almost the same price, but Samsung maintained the name of its supremacy and set the price as $649. G5 was launched with the price of $599.

Quality and efficiency isn’t compromised in both of the phones but the fact is that LG G5 didn’t succeed in reducing the name of Samsung and raising its market. Although LG has depicted its class by the launch of this set, but Samsung is still at the top priority of consumers.