A very rapid progress in the field of mobile phones is observed in the recent past. A lot of new brands have been established and many new operating systems have also been developed. In the race of operating systems, Android is at the top priority list of the customers all over the world. Competitors of Android are Windows OS and iOS. There is much of competition within Android too because a lot of brands are developing smart phones with Android operating system. Galaxy S7 is in rivaliry with multiple phones. One of the devices is HTC 10.

Both phones are the best versions of their respective brands. Most interesting thing is that both devices are pretty much similar in their looks. Length and width of both phones is almost the same, although material of the body is different. Android version of both smart phones is Android 6.0 Marshmallow. 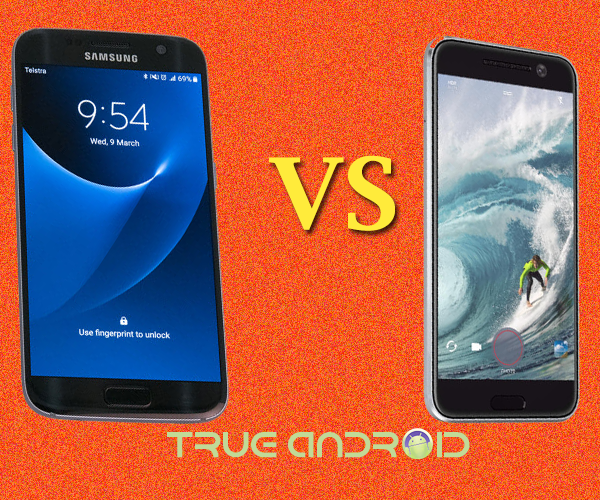 The dimensions of any phone are of particular importance to the people who are keenly involved in the launch of new and advanced versions of smartphones. Manufacturers of both devices observed the customer’s responses and their requirements. Dimensions of Samsung S7 are 5.61 x 2.74 x 0.31 inches while those of HTC 10 are 5.74 x 2.83 x 0.35 inches. HTC weighs 161g while the weight of S7 is 152g. HTC is of full aluminium body while S7 is manufactured with aluminium glass body. S7 is available in 4 colours; Black, white, gold and grey. HTC 10 is available in three colors; black, grey and gold.

Display size is also of extreme importance when it comes to the selection of smart phones. The one with bigger screen but slimmer body gets the attention of consumers. HTC is manufactured with 5.2 inch display screen with the resolution of 1440 x 2560 pixels. Samsung Galaxy S7 is developed with 5.1 inch screen and resolution same as HTC. Pixel density is kept 565 ppi in HTC while it’s 576 in S7. Moreover, Scratch resistant glass, light and proximity sensor are used in both of the devices.

Camera is definitely the most important point of interest of people interested in buying a cell phone. That’s why camera has to be very crystal clear and of high resolution. Both the phones are assembled with 12 megapixel rear camera with LED flash light in S7 and dual LED flash light in HTC 10. Aperture size of the camera is F1.7 and F1.8 in S7 and HTC respectively. Focal length is same in both of the devices with the value of 26mm. Camera sensor size is a/2.3” in HTC while it’s 1/2.5” in S7. Pixel size is 1.55 and 1.4 micrometer in HTC and S7 respectively. Both devices are equipped with the features of optical face detection, self-timer, auto focus and Geo tagging. Optical image stabilization mechanism is used in HTC. HDR (High dynamic range) is used in both phones but Panorama scene capturing capability is added to the S7. Front camera of both phones is 5 megapixels.

Looking at the multimedia options, all conventional options are included in the media of both phones like filtering the music by Album, Artist, Genre and Playlist etc.

Hardware of the device should also be efficient for the success of the new model. Keeping the fact under consideration, HTC 10 is developed with Quad-core 2200 MHz, Kryo, 64 bit processor while S7 is manufactured with Octa-core 2300 MHz, Exynos M1 and ARM Cortex-A53, 64 bit processor. RAM allocated in both of the devices is 4 GB while internal memory kept is also same. i.e. 64 GB.

Battery power and timing is also a very important area customer ponders upon before choosing a device. Battery used in both smart phones is 3000 mAh and irreplaceable.

Bluetooth, NFC, Wifi and USB charging and mass storage features are a part of both the devices. Accelerometer, Gyroscope and Compass are being used in both phones while HTC is additionally equipped with Pedometer and thermometer.

Apart from the reputation and fame of Samsung galaxy, it can be said that HTC 10 is the real competitor of S7. Its specifications, quality of hardware and software everything is perfectly in competition with S7. In terms of specifications and brilliance of features, HTC is of a little more value than S7.