The Samsung Galaxy S7 has established itself as a serious contender in the race for owning the crown for top smartphone. With a design which is familiar but packs a faster CPU, better battery life and an amazing camera, Apple iPhone 6S could be given a serious run for its money. Looking to buy one of these? Here’s your comprehensive guide to features and components in Galaxy S7 and iPhone 6S.

The iPhone 6S does not differ radically from its predecessor, however, it still remains one of the best compiled together phones in the market. With its 7.1mm thickness and anodised aluminium black, the phone weighs around 143g and is curvier and tougher than its predecessors. However, Samsung, in its S7 model, made a number of small but significant changes to make the phone look aesthetically appealing. The phone has a metal alloy body with a glass front and back and is 7.9m thick and weighs 152g. The thickness makes the phone more comfortable to hold and is easier to pick up from a flat surface. S7 can, hence survive an accidental encounter. 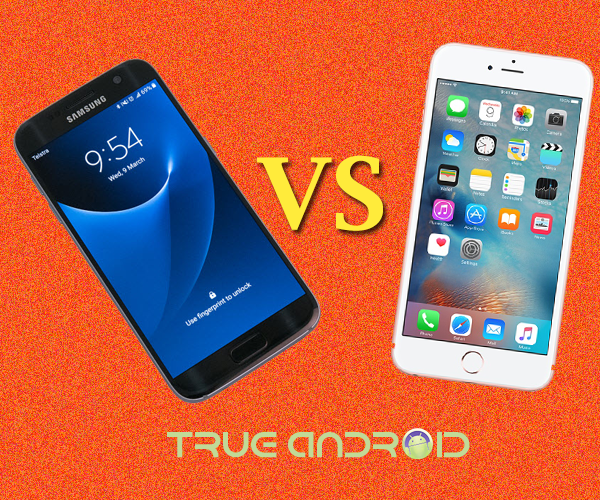 S7 has a display similar to S6, thus, it is radically much sharper than the screen of 6S and displays deeper blacks, courtesy its Super AMOLED tech. For those arguing that AMOLED screens are oversaturated, Samsung offers a variety of screen tone options for naturalistic pictures. However, the S7 does not feature a 3D touch like 6S. For those who are familiar with this, lack of this feature can become a sticky point between the two phone models.

The Galaxy S7 is powered by Exynos 8890 processor in the UK and with Snapdragon 820 in the US. The performance is significantly better than S6. The gamers will rejoice with this one, being loaded with a hefty 4GB RAM. Iphone, meanwhile, has 2GB RAM and dual core A9 chip. Samsung clearly has advantage unless iPhone 7 arrives. Moreover, multiple tests have shown that S7 has a clear lead over 6S for high end tasks.

The iPhone 6S is no slow poke when camera is involved. It boasts of one of the best automatic mode in the phones around, the only drawback being the lack of Optical Image Stabilization (OIS). Galaxy S7, on the other hand, boosts its low light performance with multitude of techniques. S7 features a 12 megapixel sensor which is actually less than its predecessor but captures bigger pixels and hence, more light. The aperture has also been widened so that more light than 6S can enter the phone. Needless to mention, the autofocus system is the best in Galaxy S7, being quick and accurate.

One may think that S7 being 32GB of internal storage so its a win for iPhone with 16GB, 64GB and 128GB of internal space. Samsung allows bolstering its fixed storage via a microSD slot. However, this only works as a storage. The decision here purely lies with what kind of usage you’re looking at with your phone.

Samsung’s TouchWiz has present problems in the past and so far, it seems that Samsung refuses to heed to it. While the feature is better than before yet the unnecessary apps may make a perspective buyer cringe. 6S, on the other hand, is cleaner, smoother and gives a more consistent experience than S7. S7 uses Android 6.0.1 Marshmallow with Touchwiz UI while iPhone uses iOS 9.3.

Galaxy S7 is simply an absolute beast of a smartphone. It triumphs design, camera and performance – the holy trinity of smartphone features. This is indeed a worthy rival to the iPhone 6S. With a better display, capable processor and better performance, the nod clearly goes to S7. However, Apple is already halfway through its flagship model and Samsung must wait for its real competition a few months down the lane.