This rooting tutorial that allow you to root Samsung Galaxy A7 SM-A700L running on official firmware won’t require custom recovery such as CWM recovery or TWRP recovery, instead we will use ODIN utility. A rooted Android device let you access system files, allow you installing custom firmware and let you flash MODs using a custom recovery.

Warning!We at True Android produce tutorial to help out fellow Android users but all this guide are educational purpose only. You should try this guide at your own risk. Neither we nor the developer should be responsible if your Android device experience a damage after following this tutorial. Also remember,this guide is only applicable for Samsung Galaxy A7 SM-A700L. Don’t try this guide in any other Android device. It may hard brick your device.

1. Backup your device data. You can follow our ultimate backup guide. [Optional]

2. Make sure your device have at least 30% battery power. You can install an app like Battery Notifier BT Free on your Android device to check it easily.

3. You already have USB Driver Installed for Samsung Galaxy A7 SM-A700L in your PC. Windows OS download and install USB driver automatically when you connect your device first time. [Download USB Drivers]

So, you done everything that we mentioned above, right! Now, you are ready to move towards next stage of this guide where we summed up detail instruction on how to root Samsung Galaxy A7 SM-A700L running official Android firmware. Remember, it’s very important for you to follow everything that we mentioned below to successfully root your Samsung Galaxy A7 SM-A700L on official Android firmware.

Step 2: Now extract CF-Auto-Root Zip at a convenient location in your desktop; you should get a .tar.md5, Odin3-v3.07.exe and few other files within extracted folder. 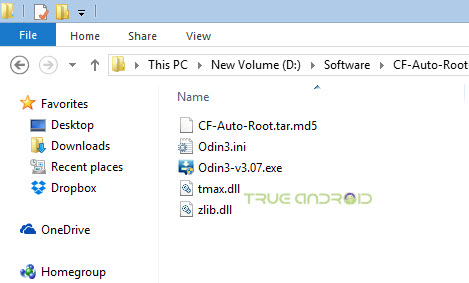 Step 3: Now turn off your Samsung Galaxy A7 SM-A700L by long pressing Power button and then tapping on Power off option. Wait 5-6 seconds for vibration to confirm complete switch off. 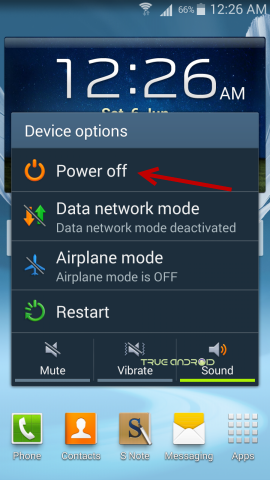 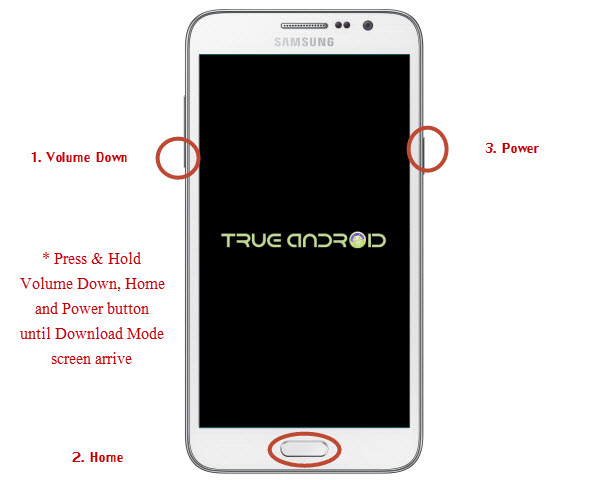 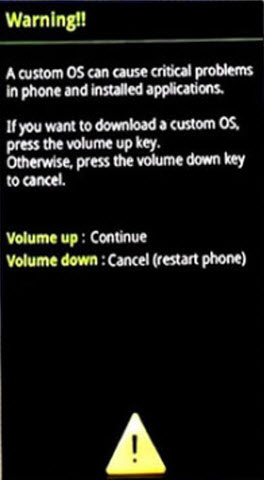 Step 5: Now run Odin3 v3.07.exe that you get in Step 3 as an Administrator because Admin privileges is required to complete this installation process smoothly.

Step 6: Now it’s time to connect your Samsung Galaxy A7 SM-A700L with your PC using USB cable. Do it and you will see a message under Odin’s message box in the bottom left saying “Added!!”. If you don’t get it then you should try another USB port (try USB port located in back of your desktop PC cabinet). If this still can’t solve your issue then you should reinstall USB driver for your device. However. if you successfully see the “Added!!” message in Odin then you are ready to go in next step. You should also see COM port with a number, below ID:COM. 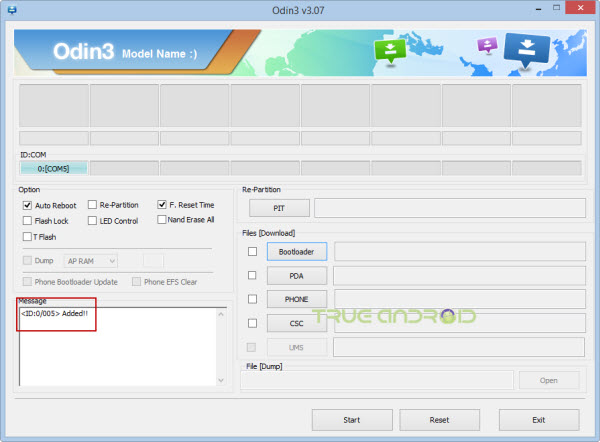 Step 7: Now, click the PDA Button, and select the CF-Auto-Root-a7ltelgt-a7ltelgt-sma700l.tar.md5 file that we received at Step 2. 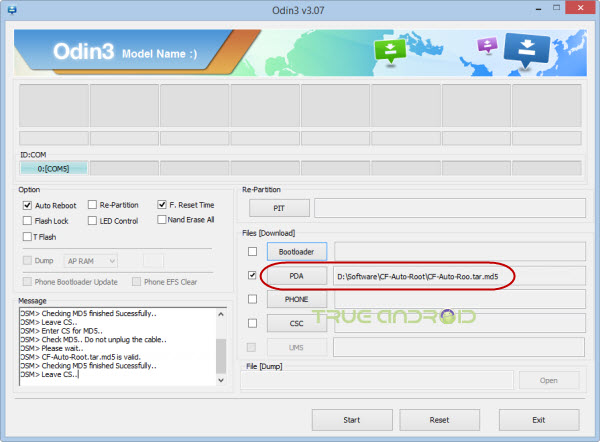 Step 9: To make flashing safe for you double check everything that we mentioned in Step 7 and Step 8 above. Now, once you are ready, hit the START button to begin the flashing process. You can see the progress on your Samsung Galaxy A7 SM-A700L screen. 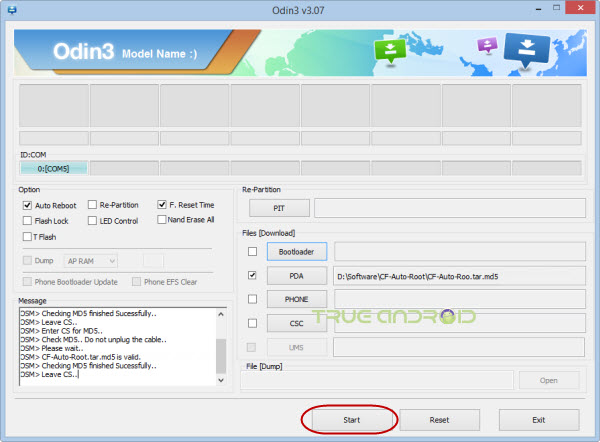 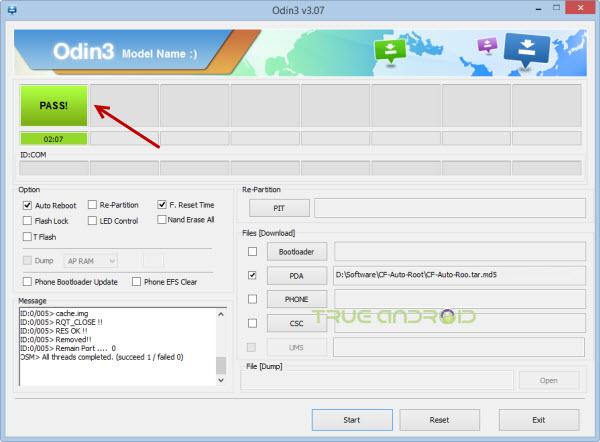 That’s it! Your Samsung Galaxy A7 SM-A700L running on stock Android firmware is now rooted. You should now see SuperSU app in your app drawer. Tap on it and it will ask you to update the binary. The app also prompt you to disable Knox when installed. 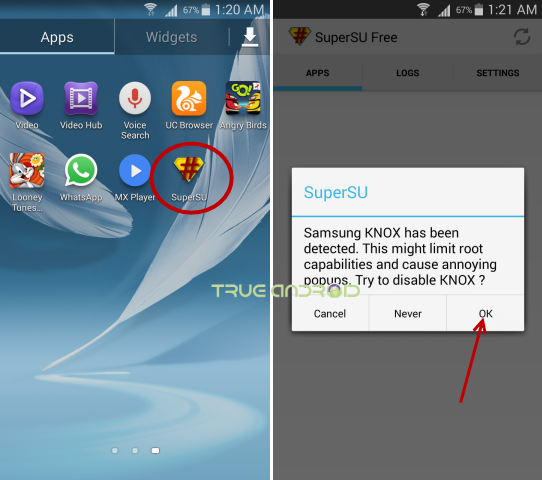 Once done, you can then install apps that require root permission as well as access system files. To confirm if you successfully rooted your Samsung Galaxy A7 SM-A700L or not, install an app called “Root Checker” which is available for free from Google PLAY store. We recommend you to check out Best Apps For Rooted Android Devices (Android Phones & Tablets). 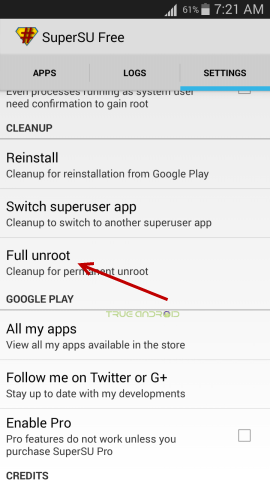