TWRP 3.0.2-0 Touch Recovery for Nexus 7 2012 (3G) is now available. You can download and install this touch supported custom recovery using details guide below. This latest TWRP recovery version comes with various improvement along with new features that I have added later part of this guide. If you planing to flash custom ROM based on latest Android version such as Android 5.1.1 Lollipop or Android 6.0.1 Marshmallow, you must have a latest custom recovery installed. Continue reading this tutorial to learn how to install TWRP 3.0.2-0 Touch Recovery on Nexus 7 2012 (3G) as well as how to upgrade from previous version.

About TWRP: Team Win Recovery Project, or twrp2 for short, is a custom recovery built with ease of use and customization in mind. We started from the ground up by taking AOSP recovery and loading it with the standard recovery options, then added a lot of our own features. It’s a fully touch driven user interface – no more volume rocker or power buttons to mash. The GUI is also fully XML driven and completely theme-able. You can change just about every aspect of the look and feel.

If you don’t know then, stock recovery comes with various limitation including lack of backup and flashing a custom firmware ability. On the other hand custom recovery such as TWRP recovery allow you to do various task including ability to flash custom ROMs and other signed zip, backup and restore whole system, can clear Dalvik cache, can fix permission and many more. The latest TWRP 3.0.2-0 Touch Recovery also comes with various added features. Here is a list of features that added to latest TWRP 3.0.2-0 Touch Recovery. 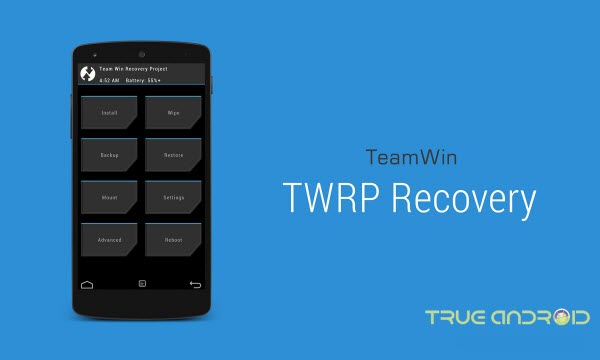 This tutorial is only for Nexus 7 2012 (3G). Don’t try this guide on any other Android device. Also, we (True Android Team) are not responsible for any damage caused due to the instruction given in this page. Try this at your own risk. However, it is very unlikely that your device will be damaged if you follow all the instructions as it is which are mentioned in procedure.

Though installing TWRP recovery don’t erase internal memory data but we recommend to back up your data first before proceeding to avoid any uncomfortable situation.

2. Make sure your device have at least 40% battery power. You can install an app like Battery Percentage on your Android device to check it easily.

4. Make sure USB Debugging is enabled otherwise you won’t able to transfer file between PC and Nexus 7 2012 (3G). [Guide].

5. Your device is rooted (only require if you using mentioned app). [Guide]

If you done everything that we mentioned above then you are ready to follow step-by-step guide on how to install TWRP 3.0.2-0 Touch Recovery on Nexus 7 2012 (3G).

File Required(Download by clicking on it)

Congrats ! You have successfully installed the TWRP 3.0.2-0 Touch Recovery on Nexus 7 2012 (3G) and you are now free to test latest Android 6.0.1 Marshmallow based custom ROM as well as old ROM on your Nexus 7 2012 (3G). To boot into recovery, first turn off your device and then press and hold Volume Down + Power key together and release the Power key once the Google logo appears, but keep holding the Volume Down key. You will be in Bootloader mode now. Press Volume Down two times so that Recovery option appears, and then press Power key to reboot into recovery mode.