Apart from the aluminium build and a new 64GB storage model, the innards of the new Amazon Fire HD 10 tablet are the same as the old one. 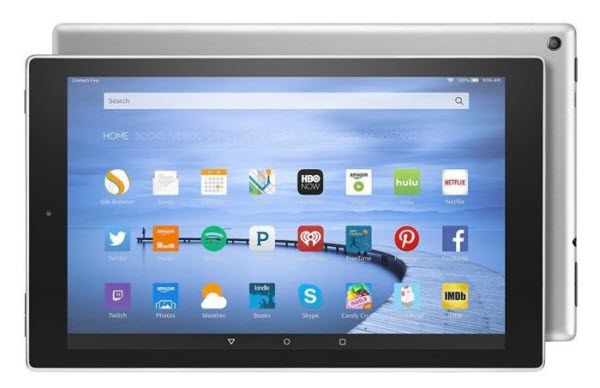 It features 10.1-inch IPS display with 1280×800 pixels resolution and offers a pixel density of 149ppi, powered by a 1.5GHz quad-core MediaTek processor and comes with 1GB of RAM. It supports expandable storage via microSD card (up to 128GB). The amazon saying it can offer up to 8 hours of mixed usage which can include reading, browsing, watching video, and listening to music. It can fully charge in under 5 hours, according to the company.

It sports a 5-megapixel rear camera and a 720p (unspecified) front-facing HD camera. It supports Wi-Fi and comes with 3.5 mm audio stereo jack, and integrated stereo speaker with Dolby audio. It runs Fire OS 5 which comes with features such as VoiceView, a new screen reader; new user preferences including ability to adjust spoken punctuation level and key echo; quick gestures to adjust and navigate content by granularity; optimised web browsing; updated earcon sounds, and expanded Large Font mode. The tablet’s VoiceView is powered by the company’s Ivona text-to-speech screen reader and it provides spoken feedback to describe the actions that take place on the screen. It measures 262x159x7.7mm and weighs 432 grams. The tablet comes in Black, White, and Silver Aluminium, which is the new addition. The Amazon listing notes that the Silver Aluminium version is only available with the 64GB storage model.